Studies in Mycology No. 37 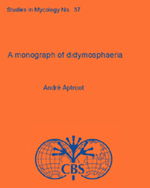 A world monograph is presented of the pyrenocarpous ascomycete genus Didymosphaeria (Didymosphaeriaceae, Melanommatales). Over 550 taxa have been described in it, of which only about 100 had been transferred to other genera before the beginning of the present study. Examination of over 3000 specimens, including the types of most taxa, has shown that more than half of the described species do not belong in Didymosphaeria. Only seven species are accepted in the genus, with over 100 synonyms distributed among them. Many taxa were found to belong to other groups. Some of the excluded species have been treated in a separate paper (Aptroot, 1995). Many others are redisposed here. Descriptions are provided for all accepted species of Didymosphaeria and for many species that are assigned here to other genera. An annotated list is provided of all taxa placed in Didymosphaeria. The ascospores of Didymosphaeria s.s. appear to be distoseptate, a feature not noted before which places the genus in the distoseptate Melanommatales (i.e., the Pyrenulales). 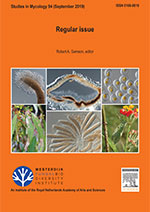